The most fun I've had in a long time

As of writing this review, Hearts of Iron IV (HOI4) is my most played game on Steam, with an almost 300 hour lead over second place, so I think it's safe to say I've played the hell out of this game.

But is it any fun?

Well, that's the thing... To begin with, no. For the first few hours, the game isn't fun at all. You have no idea what you're doing, even if you do the tutorial, and you're just getting your arse kicked by even the weakest of nations.

I've gifted this game to a few friends, and two of them never managed to beat Ethiopia as Italy, in the tutorial, because they had no idea what they were doing and the tutorial didn't explain how to win. I've seen the same happen in a livestream or two, when people bought the game and streamed it straight away.

But once you cross that initial hurdle, and start to understand when to attack, when to defend, and when to retreat, along with what technologies are worth researching, and when. You start to find the game more enjoyable, and once you fully understand the ins and outs of the game; national focus trees, terrain modifiers, manpower/equipment bonuses/effects when low, etc... That's when you truly start to enjoy the game.

So when does one reach this stage?

That depends solely on your gaming history. Before HOI4, the only real strategy game I had played was Sid Meier's Civilization V, so the mechanics of HOI4 were all alien to me, but to someone coming from Hearts of Iron 3 or Europa Universalis will understand the game after their first game.

What is the game about?

Hearts of Iron IV is a World War 2 grand strategy game, where you can take control of any nation that was independent at the outbreak of the war, along with being able to release a majority of non-independent nations, and choose the outcome of the war you want.

Do you want Stalin to be the ultimate ruler of Asia? America to fall under communist control, and start a war with the UK over Canadian control? The United Kingdom to fail to defend France as Germany marches through the country? Whether it's historically accurate, or not, you can have all these situations, and more, all play out to your liking in HOI4.

The graphics in this game are amazing. But, you don't really spend your time looking at units and the combat graphics. You spend the majority of your time zoomed out, watching your front line from afar, ordering divisions around, and managing your nation through a series of GUIs. These interfaces are by no means ugly, but there is nothing standout about them, and because there is sometimes a lack of consistency (sometimes with good reasoning - e.g. ship production vs plane production) I can't bring myself to score it any higher.

Now onto the high scorers... Sound. The background music in this game is great. The orchestral melodies that fit really well into the current world's situation, as you are playing, makes the game feel so much more alive. The louder, and deeper music, as Germany controls Europe, vs the lighter and more uplifting music as the allies liberate Europe makes you feel like you are there, and feeling the mood of the people at the time.
There is also a DLC which includes Sabaton songs into the game. But my score doesn't reflect these, as I'd much rather not have heavy metal music play instead of some of the great orchestral music which this game has to offer.

Immersion. Well... How do I put this lightly... You will lose days to this game. I honestly don't know how I have managed to stay alive when playing HOI4. I will start a game at around midday, finish at around 9pm, and have not realised that much time has passed. You feel like you're controlling every aspect of the nation you chose, and you don't want to leave your seat, just in case the enemy gives you a great opportunity to make a breakthrough, or you get an event which could make or break a diplomatic relationship.

But surely the game will become stale?

You'd think that, but there's so much to this game, it's unreal. Out of the 688 hours on record, at the time of writing this review, less than 10 hours of that has been spent in multiplayer, and less than 50 hours has been spent playing with mods that completely overhaul the game, such as Kaiserreich or Millenium Dawn.

Just when you think you've tried everything, you start to do stupid things... such as playing as Luxembourg... and becoming the proud owner of the UK, India, Malaysia, and Norway (along with a few other, minor, colonial holdings) 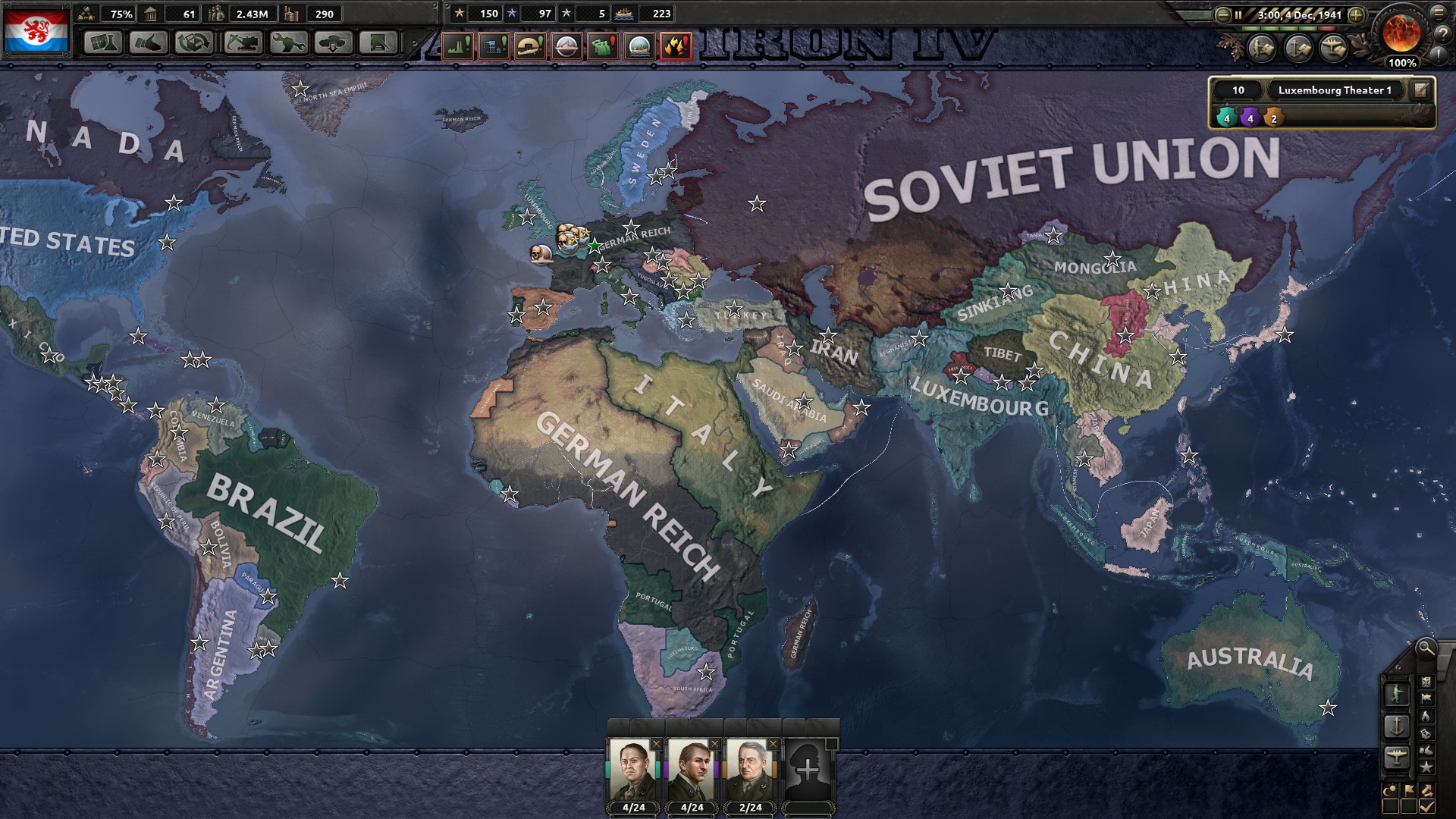 (After this happened, Germany and I invaded the USSR, where Luxembourg grew even more)

Or you could get some friends together and play multiplayer games, or play with mods. But I feel there's still many more hours to be had in singleplayer before I go for that. There's still Steam achievements I am yet to get, after all.

There's much more that I could talk about with Hearts of Iron IV, but I feel it's best to let people explore them on their own, so I'm going to end the review here.

I know this is two strategy games in a row, but honestly, I don't care. HOI4 is great and I didn't want to leave this review any longer. Next game definitely, probably, won't be a strategy game seeing as I generally don't care for them.